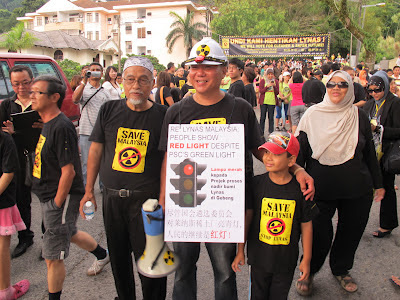 Over the weekend, communities throughout 30 locations in Malaysia took part in a National Day of Stop Lynas action to mark their strong objection to the rare earth refinery project near Kuantan. In Australia, solidarity actions took place in Sydney, Melbourne, Perth and Roxby Downs at an anti-nuclear music festival in the outback arid zone of South Australia. {photographs of the various actions attached}
Mr Tan Bun Teet, a spokesperson for SMSL recounted the weekend events, “we are greatly encouraged by the strong support we got from other communities throughout the country and from Australia.  The weekend results have restored many people’s determination to keep fighting the terrible decision made by the government.”

The government’s refusal to acknowledge and take on board citizens’ concerns and strong opposition to the Lynas project despite on-going public protests since the issue became known last March is a slap in the face of democracy.  The Stop Lynas campaign is now the largest ever environmental battle in the country and support from overseas is gaining momentum.

It has certainly compelled many citizens to weigh out their development priority between wealth and the sustainability of the natural environment as well as their health. It has also raised awareness amongst citizens to vote for a party that will secure them a clean and healthy future.  A mock referendum was held in all of the Malaysian locations to prepare people for the next election and to educate people to vote to protect their future.

“An overwhelming 99.9% of the 20,000 over people who were eligible to vote opted for the Lynas project to be stopped.  For so many people to come out to show their opposition, it is a clear indication that Malaysians are ready to vote wisely at the next election.” Said Ram, another spokesperson from SMSL actively involved in the campaign.

The Lynas rare earth refinery plant was constructed without any prior informed consent from local communities and citizens who will be getting the blunt end of the raw deal of permanent pollution risk whilst Lynas will be making a hefty profit tax—free.  Malaysians will be living under the shadow of radiation contamination for ever from the world’s largest rare earth refinery built and managed by a company with no prior experience dealing with the complexity of rare earth pollution.

Worst, this world-scale refinery is situated in a peat swamp area only 3.5km from the South China Sea, an important seafood and tourism hotspot!

“Given the Government’s mishandling and poor management of the Bukit Merah rare earth plant, it is ludicrous that we now have a plant at least ten times bigger with hundreds more times toxic waste to handle.  It is on this basis that we as responsible tax-paying citizens will have to do everything possible to stop this madness.” Concluded Mr Tan