BY SAVE MALAYSIA STOP LYNAS
JULY 30, 2017
LYNAS MUST DISCLOSE ALL FACTS BEFORE “CONDISOIL” IS RELEASED FOR COMMERCIAL USE

Press Statement by Save Malaysia Stop Lynas on recycling of the so-called Lynas Advanced Materials Plant (LAMP) in Balok, Pahang waste residue into an industrial by-product being marketed as soil conditioner under the name “Condisoil”.

We note with interest all announcements by Lynas on their efforts to recycle LAMP residue into a commercial industrial byproduct called Condisoil.

Due to our proximity to the area and our constant research we believe this is an attempt by Lynas to avert their obligation from building a Permanent Disposal Facility (PDF) as recommended by the IAEA Committee in 2011.

This issue is highly technical and requires extensive research on our part and we implore our fellow malaysians and members of the media to take time, understand the technical details and warn the public of the health and environment hazards involved.

In short Lynas Malaysia is attempting to avoid/escape the construction of a PDF by marketing its waste products as soil conditioner and other industrial products by claiming the radiation output of its waste is “intrinsically low”.

They have grossly misinterpreted a report by the International Atomic Energy Agency (IAEA) report in their efforts to escape their obligation and below is a detailed explanation of our claims:
Here are the facts:

1. In 2014, when the TOL needed to be renewed, Lynas in its 4th Quarterly activities report submitted to ASX on 31 July 2014 under the heading ‘Synthetic Mineral Products Program’, ‘Road base material developed from WLP has been certified by the AELB as non-radioactive material and the Company is preparing to seek Malaysian DOE approval for construction of a demonstration and assessment road using this material.’

‘The Company ,it continued, has gained approval from a customer and is preparing to make the first commercial trial export of NUF. Negotiations are ongoing for further commercial shipments. Lynas has also finalized the specifications for three granulated products for use in broad-acre trials.’
Unknown to all, in April 2014 The Malaysian Journal of Analytical Sciences, has published a paper on an attempt by UKM to extract Thorium from WLP in a Digestion Study. The paper was published under the heading ‘ Digestion Study of Water leach Purification (WLP) residue for possibility of Thorium extraction.’ The success rate was merely 5%.

In the paper WLP was found to contain Thorium concentration of 1952.9 mg/kg Uranium 17.2 mg/kg. According to Lynas over 99% of thorium in the feed lanthanide concentrate is removed to WLP and through calcination at temperatures up to 600 degrees C. The Thorium concentration in WLP of 1952.9ppm has a radioactivity of 7.98 Bq/g which was higher than what Lynas officially declared of 6 1 Bq/g, therefore it needs to be considered for regulatory control as the radioactive residue.

In the face of this scientific report, it defies one’s imagination to believe what was ‘dished out’ above by Lynas on claims that AELB certified road base material developed from WLP is non-radioactive!

2. On Dec 18 2016, it was reported by the Sundaily.com that the Vice president of Lynas Malaysia, Datuk Mashal Ahmad said that UPM and MARDI was running field tests on a soil conditioner that was derived from its WLP residue. Its CEO Ms Amanda Lacaze said LAMP produces 3 solid residues two (NUF & FGD) of which are non radioactive while WLP has ‘very low radioactivity.’

It is true that NUF and FGD residues have concentrations of U< 0.0062 Bq/g and Th < 0.002 Bq/g , falling below the threshold of 1 Bq/g thus are non radioactive. They were officially discharged from regulatory control by AELB on 17th Oct 2013 but are still controlled as ‘scheduled waste’ in terms of environmental regulation. Thus they fall under the purview of DOE.
In our interactions with officers from DOE we were made to understand that Condisoil was made from FGD and NUF and it does not contain WLP residue as it is still under regulatory control by AELB.

On 27 July 2017 Lynas released a statement on Condisoil and no details on its composition or formulations were provided except the frequencies these different samples were submitted to SIRIM.
This statement only appeared after the Minister of MOSTI remarked that he agreed with the MP of Kuantan that ‘Lynas has jumped the gun’ as Condisoil is still in the research process. Further in his reply he revealed that the composition of the Condisoil is made up of 1 part WLP; 2 parts NUF and 7 parts FGD in the ratio of 1:2:7! The results of the safety confirmation test will only be known at the end of August.

The question that ought to be pertinently asked is why all these differing contradictory statements from the parties involved? Any discerning individual will conclude that the real issue behind is the insoluble problem of finding a suitable site for PDF and have it constructed according to international practice.

We have tried in many past occasions to initiate positive engagements with Lynas Malaysia to seek explanations on issues of grave concern to the residents of Kuantan but were met with outright haughty refusal , the latest being an attempt to provide them a platform to explain their plan to recycle the solid wastes.

The IAEA review report recommended that Lynas be encouraged to maintain an ongoing, proactive approach to relations with the fullest possible range of stakeholders, including active opponents of the plant, keeping a low threshold for engagement and ensuring maximum transparency to address continuing widespread misconceptions.’ They have obviously overlooked this.
In the absence of trust and respect for all the stakeholders in Kuantan, Lynas’ attempt to pull a wool over the residents’ eyes on the recycling narrative will one day destine to meet its karma.

Issued by
Save Malaysia Stop Lynas steering Committee
29th July 2017
Posted by Save at 03:25 3 comments

KUALA LUMPUR: Sirim is yet to give the green light for condisoil, a soil conditioner derived from residue produced by the the rare earth plant run by Lynas.

Science, Technology and Innovations Minister Datuk Seri Wilfred Madius Tangau said Sirim has not completed its test on the condisoil.

He said Lynas has jumped the gun in stating that Sirim has given safety confirmation for its condisoil.

"I agree that Lynas has jumped the gun as the test is still underway.

"It is better to leave it to Sirim to complete its work and let the Environment Department announce the results," Wilfred told Fuziah Salleh (PKR-Kuantan) in the Dewan Rakyat today during Question Time.

Fuziah said Lynas had in its email to the Save Malaysia; Stop Lynas chairman stated that "the condisoil is non-toxic, non-radioactive".

"I think this is jumping the gun as you said the test is still underway," she told Madius.

"As of now the safety confirmation test is still being conducted by Sirim. The final report will be released by end of August," he said.

It was reported that Lynas said the Atomic Energy Licensing Board and Nuclear Malaysia has confirmed that the condisoil is non-radioactive and that Sirim has confirmed it to be non-carcinogenic and non-ecotoxic.

Rare earth mining company Lynas Corporation hopes to process residue from its production operations for commercial use next year.

In an interview last year, Lynas Malaysia Sdn Bhd vice-president Datuk Mashal Ahmad had said 211,454 metric tonnes of residue are being stored at its advanced material plant and it is collaborating with two institutions to turn the waste into material for use in agriculture.

He said Universiti Putra Malaysia (UPM) and the Malaysian Agricultural Research and Develop­ment Institute (Mardi) is running field tests on a soil conditioner that was derived from its water leach purification (WLP) residue.

"Researchers from both institutes have tested this conditioner, called "Condisoil", on various crops including corn, kenaf, paddy, coconut and cattle-grass.

"After two harvest seasons, the initial results are amazing, with the growth rate of the plants doubled using Condisoil," he said.

Email ThisBlogThis!Share to TwitterShare to FacebookShare to Pinterest
https://www.facebook.com/YBFuziahSalleh/videos/759476814220648/ 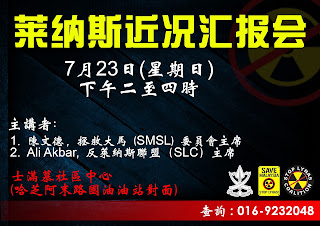 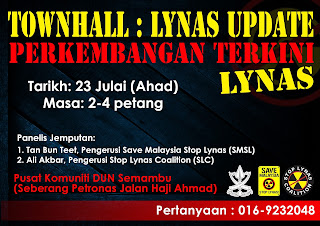 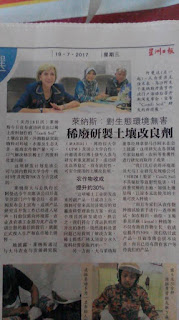 If you can read Chinese, then you will believe that they have successfully turned the radioactive waste WLP into the product called 'Condisoil'!

Is this a Nobel prize winning feat or a mere PR stance to fool the uninformed?

We will explain to you the details of Lynas' recycling of the 'wastes' produced at LAMP this coming Sunday at Pusat Komuniti DUN Semambu.

Make sure you attend so that you can hear both sides of the story and you will know if Lynas needs to build the PDF.