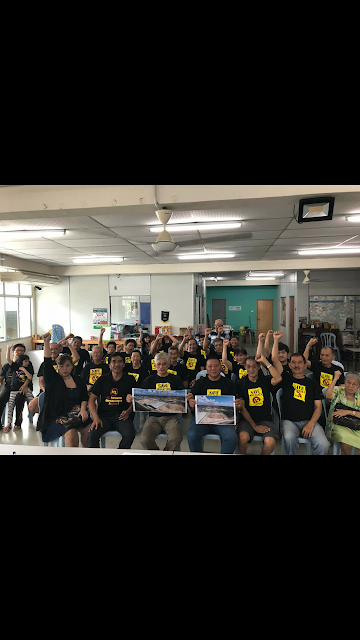 Save Malaysia, Stop Lynas is deeply disappointed with the Pakatan Harapan (PH) government's decision to extend Lynas' waste storage licence given the hazards of its wastes.

"We are alarmed by the sheer volumes of waste generated so far. Apparently over 450,000 tonnes of the most toxic of Lynas' wastes has been left near the LAMP. If this is the case then there will be over 880 tonnes of thorium in the mix."

"In any country with a responsible government, the refinery would have not been issued any licence to construct the plant, let alone generating so much waste contaminated with radioactive thorium, toxic heavy metals, chemicals and compounds which Lynas has not fully disclosed.”

Even China has better standard since 2010 than Malaysia in managing and regulating its rare earth industry."

Many of us felt cheated for voting for the PH Government thinking that it will make a real difference to make our future safer and cleaner.

Here are the standards China now observes for their Rare Earth’s industry - they have very clearly defined standards for their effluent discharge as well as solid wastes measured in molecular terms.

Each of the chemicals inherent in the effluents and solid wastes are systematically listed and classified accordingly to their toxicity to the waterways and soil.

Here, every time we breathe in the air, we have no idea if Lynas' thorium will be in the air, in the water we drink or in the food we eat.

Everyday Lynas is allowed to operate without a safe storage facility for its toxic waste, our health is put at risk by firstly, the Najib's Government's decision to allow Lynas into Malaysia, and now the PH's Government's failure to do something about that decision that is allowing another toxic legacy to happen at our doorstep.

Lynas' Water Leached Purification Residue (WLP) is 8 times that limit and our Government believed in Lynas' spin that low level radioactivity is safe.

We cannot accept this and we will continue to fight for our safety and that of future generations' since thorium has a 14 billion year half-life.

We cannot tolerate a known carcinogen - cancer causing substance - to be piled up high so close to populated area, fishing ground and agriculture area.

In a decent civilized country, the Government would not have tolerated the way Lynas' been dumping its hazardous waste in the open where thorium have been carried far and wide by the wind and rain.

More so when we have the annual North Eastern monsoon winds and rains.

The people of Kuantan placed high hopes on the newly elected PH government to correct the wrongs that the previous Barisan Nasional government committed especially in regards to Lynas advanced Materials Plant (LAMP).

Failing to act in the best interests of the people will render this government akin to the previous corrupt one and people will not forget how they have been double crossed.