Government must shut down the LAMP to investigate the fatal accident

SMSL - SLC - Himpunan Hijau Joint Press statement
Government must shut down the LAMP to investigate the fatal accident
14 December 2013
SMSL, Stop Lynas groups and local members of Parliament and State Assembly men are deeply concerned with the fatal accident yesterday at the Lynas rare earth refinery plant in Gebeng (LAMP).  A worker died when he fell into a pond when he was performing a routine test in the morning.  Before the news was reported in the media, SMSL was tipped off from a number of sources.
Mr Tan Bun Teet, the spokesperson for SMSL said, “This is very serious. We are demanding the government to shut down the LAMP immediately and cease ALL activities in the plant until a full and comprehensive independent investigation is completed by the relevant authorities  like DOSH to establish the nature and the cause/s of the fatal accident.  Safer work place and a healthy environment  should be in place when highly corrosive and hazardous substances are handled to protect the life and the safety of workers at the plant.”
In May last year a 34 year-old Lynas subcontractor died after a couple of months suffering from complex respiratory problems.  He worked at the LAMP for over twelve months before he fell ill. (http://www.chinapress.com.my/node/316657).
Later,  another death was officially reported by the police to have occurred during an interview session  in the plant  .
“We have heard of these cases at the community level.  This is the first time Lynas has actually issued a media release. The Government must come clean to disclose these cases of mishaps in fairness to those who have suffered and to the grieving families of those who have sadly departed. “ Said Ali Akbar bin Othman from the Stop Lynas Coalition (SLC).
“Obviously the trust in Lynas and the authorities are lacking which is why a citizen group like SMSL has been called up with such information.  Lynas and the Government owed to the family of the victim/s and the remaining workers at the LAMP a decent standard of occupational health and safety. ” Concluded Mr Tan 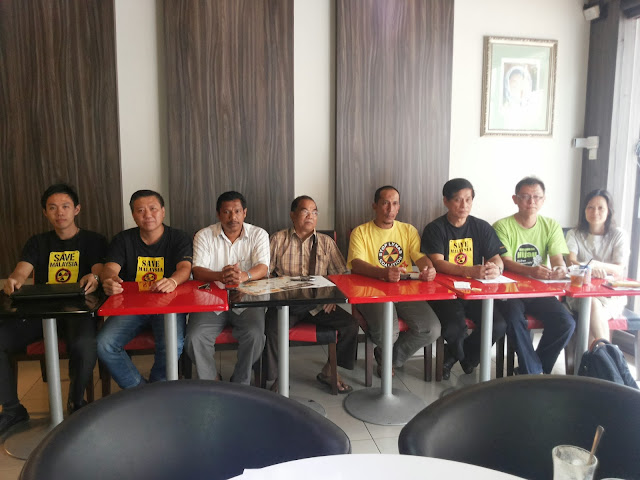 KUANTAN: An engineer of the Lynas rare earth plant drowned Friday in a pond at the plant in the Gebeng industrial area here, police said.
Kuantan deputy OCPD Supt Abdul Aziz Ahmad said Mohamad Fadzli Mohamad Rafdzi, 33, is believed to have slipped and fallen into the pond at about 9am.
A colleague, Sharizal Samsudin, 40, lodged a police report at the Gebeng police station, he said.
Abdul Aziz said the police and firemen rushed to the plant and rescuers found Mohamad Fadzli's body in the pond at 2.40pm and sent it to the Tengku Ampuan Afzan Hospital in Kuantan.
Police did not suspect any foul play in the incident, he said. - Bernama

No respite in sight as Lynas bleeds - Soo Jin Hou

I attended the Lynas annual shareholders' meeting (AGM) on 29/11/2013. During the meeting, I asked 2 questions.

The first: "In view of Molycorp's intention to ramp up their rare earths production by 130% from 10,000 tons to 23,000 tons per year, how does Lynas intend to do the same without a collapse in rare earth prices?"

The second: "The Malaysian government is under tremendous pressure after the Fitch rating downgrade to reduce or withdraw energy subsidy. How much will Lynas be affected if the energy subsidy is withdrawn?".

Neither question was satisfactorily answered and this suggests that it is likely that Lynas will continue to bleed red ink in the near to medium term.

Rare earths prices have collapsed spectacularly over the past 2 years (see Table at bottom of page). The 2 primary products from Lynas, i.e. lanthanum (LaO) and cerium oxides (CeO), which make up 72.2% [1], saw a 95% collapse in prices. Their current prices of less than AUD$6/kg (RM17/kg) are well below Lynas' current production cost, and more shockingly, below the optimal production cost of AUD$14-$15/kg (RM40.70-RM43.60/kg) Lynas needs to achieve by running at maximum capacity of 22,000 tons per annum (tpa) [3]. This is distressing because if Lynas cannot make money from these two products if conditions are ideal, Lynas will never make money from them.

Interestingly, the depressed prices come amid Molycorp running at only half its capacity [4] and Lynas at 19% of capacity [5]. So if both simultaneously ramp up production, REO prices will be crushed. Molycorp has expressed intent to increase production from 10,000 to 23,000 tpa by end of 2014 [6], while Lynas has expressed intent to increase from 4,200 to 11,000 tpa by next quarter. The combined increase is a whopping 239% from current production levels! The problem with Lynas and Molycorp is that their combined capacity of 42 tpa is 60% of the global demand outside China. They are so big they control prices. In the case of LaO and CeO, the spectacular collapse may be explained by them making up 72.2% and 83% [4] of Lynas and Molycorp's portfolio respectively.

It is quite obvious what Lynas' strategy is. Lynas hopes the profit made from the remaining products, chiefly neodymium (NdO) and praseudymium oxides (PrO) will be sufficient to overcome the losses incurred on LaO and CeO. Lynas is betting that NdO and PrO prices will go up. Unfortunately for Lynas, NdO and PrO also make up 14% of Molycorps' product [7], so premium market will also get competitive. With both players ready to ramp up production, prices are unlikely to grow much in the near term, in the best case; and in the worst case, will collapse just like LaO and CeO.

The most crucial question now is, what is Lynas' current real production cost? That data will enable us to forecast its profitability based on rare earths prices. In the absence of such data, an appropriate estimate may be production cash flow divided by November's production numbers of 350 tons (4200 tpa) [5], the highest output on record. For the period ending 30 Sep 2013, Lynas dispensed AUD$40 million (RM116.7 million) in operational, production and administration costs to produce only 253 tons (1012 tpa) of REO. Assuming the best case scenario that costs stay constant despite a fourfold increase in output, the current cost is AUD$38.1/kg (RM111/kg), an ocean divide from the targeted AUD$14-15/kg.

Lynas may see an increase in production costs. During the AGM, I raised the inevitability of the government of Malaysia withdrawing the energy subsidy, to which Lynas replied that they are minimally impacted as they are not an energy intensive company. The 3rd day after the AGM, the government of Malaysia raised electricity tariff by 15%. Electricity may not be a significant part of Lynas' expenditure, but liquefied petroleum gas (LPG) might be.

Lynas uses LPG to heat its rotary kiln, where the ore concentrate is dissolved by sulphuric acid at 650°C. According to the PEIA, Lynas consumes 12,820,000 Nm3/year [6]. That is equivalent to approximately 25.6 million kg/year or about RM 47.4 million/year. The subsidy is approximately half [7], therefore Lynas may need to fork out another AUD$16.2 million (RM47.1 million)/year if this subsidy is pulled from under Lynas' feet. Since Lynas burns approximately AUD$100 million (RM291 million)/year, I find it hard to accept AUD$16.2 million as negligible.

In addition to production woes, Lynas lost badly in the court of public opinion, despite winning all litigation cases. Pakatan Rakyat, who ran on an anti-Lynas platform, won the popular vote in the general election. More significantly, 6 out of the 7 representatives around Kuantan won on the anti-Lynas platform, proving that the local community rejected the project. Shortly after, Himpunan Hijau collected 1.3 million physical signatures (not online ones) in a petition against Lynas. Lynas provoked further anger by behaving like an ostrich, refusing to answer any allegations raised in the Oeko Report commissioned by Save Malaysia, Stop Lynas. Therefore, Lynas will be on the agenda in the next election, if it is still alive by then. It will be another stressful period for Lynas investors, who then have to dabble in political science to bet on a regime that is experiencing eroding electoral support.

The conclusion is, Lynas will fail. It is not a matterof if, it is a matter of when. It will happen when creditors stop throwing good money after bad and just let Lynas die. At the current cash burn rate at AUD$ 100 million a year, Lynas' cash pile amounting to AUD$101 million [3] can last only about a year. Is there any more creditors foolhardy enough to throw money at it?

In the face of certain failure, the residents around Balok and Kuantan should get concerned about the permanent waste disposal solution, particularly, the sufficiency of funds. If Lynas have not left sufficient deposit with the incompetent government, the taxpayers might once again, be made to bear BN's blunder.