SMSL campaigners, supporters and local residents gathered at the Kuantan High Court today to witness the official withdrawal of the defamation suit brought by Australia’s Lynas Corporation in a failed attempt to gag them. Local residents in their campaigning t-shirts bearing the Stop Lynas messages held placards to show their determination to continue with the campaign to stop Lynas’ controversial rare earth refinery plant.

Mr Tan Bun Teet, a Kuantan resident and the spokesperson for SMSL said “We knew that this day will come because we were only acting as responsible citizens exercising our constitutional rights to engage with our Prime Minister when we wrote the open letter. Our views were backed by well founded research and data which have been verified by experts. Lynas simply took advantage of Malaysia’s weak civil liberty law by using this defamation legal action to try to silent us. Well it has backfired.”

The Lynas rare earth refinery plant is located in a peat mangrove area only 3 km from the South China Sea near coastal fishing communities and housing estates. Rare earth processing has been linked to catastrophic environmental problems. With Malaysia’s outdated and weak environmental law which is seldom enforced, locals fear the Lynas plant will become a risky and hazardous operation that will leave a lasting toxic legacy for Malaysia. Lynas will be producing massive amounts of different toxic waste, some of which contain thorium and uranium which are radioactive.

“Lynas should have adhered to a higher standard of decency in the first place. How could it build a world-scale refinery plant without ever consulting with local communities in the absence of a full environmental impact assessment or a social impact assessment which it would have to do if the plant is to be located in Australia?” Asked Haji Ismail Abu Bakar, a long-term local resident and another spokesperson from SMSL.

“To add salt to the wound, the government gave Lynas a 12-year tax holiday when we the rakyat who pay taxes would end up living with the risk and hazards forever and bearing any costs of clean up! Of course we will not be accepting such a hazardous project and the raw deal lying down!” He added.

SMSL is a people’s organisation consisting of a team of highly committed community volunteers backed up by strong public support from all over Malaysia and concerned citizens internationally.

SMSL has sought expert advice on the Lynas project. It has had investigative research carried out on Lynas Corporation and its rare earth project by highly qualified independent professionals both in Malaysia and overseas.

“Our position on the Lynas plant is clear. We will fight until the end to STOP Lynas in the interest of the public and Malaysia’s future. SMSL will continue with the judicial review legal cases and its international campaign. It is a matter of either we fight the fight or risk getting exposed to Lynas’ hazards and leaving a lasting radioactive and toxic legacy to future generations!” Concluded Mr Tan. 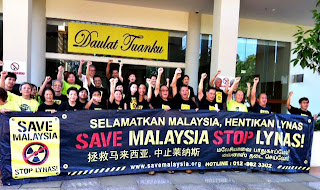 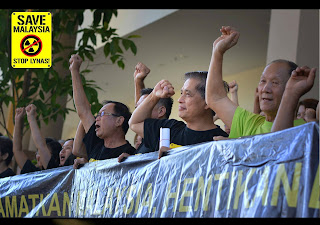 SMSL calls on the Government to suspend Lynas’ temporary operating licence since it has failed to identify an acceptable safe permanent disposal facility (PDF) by 2nd July, ten months after the issuing of the licence, as a required condition for the licence.
Mr Tan Bun Teet from SMSL said “The Government has promised to scrutinise the Lynas project. It has even gone as far as saying that it will revoke Lynas’ licence if it is unsafe. Not having a PDF is not a scientifically sound or safe solution to Lynas’ toxic waste. The Government must act responsibly in the interest of the public. We do not want toxic and radioactive waste from Lynas contaminating Malaysia!“
One such promise was made by the Minister of International Trade and Industry (MITI) Mustapha Bin Mohamed this year on 15th January. He claimed that the plant is safe scientifically and promised to scrutinise the plant and to revoke Lynas’ licence if it is unsafe. SMSL is gravely concerned that the Government has not fulfilled its duty of care in scrutinising Lynas and letting toxic waste be dumped in technically unsound and poorly designed retention ponds.
“The Lynas plant is situated near dense rural fishing villages and housing estates. Allowing Lynas to continue to pollute our air, contaminate our waterways and our land tax-free is foolish. It is a violation of people’s rights to clean air and water and a safe place to live. ” Said Haji Ismail Abu Bakar, another spokesperson from SMSL.
According to a detailed scientific analysis by the reputable German institution Oeko, Lynas’ proposed radioactive waste management plan is seriously deficient, contrary to claims by Lynas. More details can be found in the attached Oeko Report Summary.
Meanwhile the market has lost confidence in Lynas. Its share value has plunged to below Australian 40 cent last week. Currently Lynas is operating below a sustainable financial manner.
“Lynas’ failure to stick to its licensing conditions is unacceptable. It is unsafe for the public. Malaysia should not expose this kind of hazardous risk to its rakyat!” continued Mr Tan
“Lynas and the Malaysian Government may think that we will give up fighting Lynas. In truth, we have never stopped. We said we would fight till the end to Stop Lynas and we are doing exactly just that!” concluded Mr Tan.
SMSL will continue with its judicial review cases to seek the court to intervene to withdraw Lynas’ TOL for the safety and in the interest of local residents and all Malaysians. Additionally, SMSL will embark on a campaign to Stop Lynas on a wider global scale.

The roughly 1.2 million tons of WLP (water leach purification – radioactive) waste to be produced have in any case to be disposed of in a Permanent Disposal Facility (PDF), that isolates the radiologic and toxic content over virtually unlimited future times.

Any hopes that this waste can be re-used in the public domain are scientifically and technically nonsense and, with respect to the so posed risks, careless.

The operation of a facility that generates those wastes should only be (temporarily or permanently) allowed if the PDF is available, otherwise another dangerous legacy is created and the burden of caring about and disposing these wastes is unacceptably shifted to future generations.

The fact that neither the International Atomic Energy Agency (IAEA, in it‘s review) nor Lynas (in its Radioactive Waste Management Plan RWMP) nor the regulators AELB and MOSTI recognize, mention and respect the dose criteria and do not set this as their prime condition for any re-use scenario is irresponsible.