The PM has lost his way

SMSL is appalled by the Prime Minister’s apparent ignorance of the scientific and engineering facts related to the Lynas rare earth refinery project in Gebeng, near Kuantan.

Mr Tan Bun Teet, SMSL spokesperson say, “We noted with extreme regret that until this day the Prime Minister has either not been officially informed of all the facts that we Save MALAYSIA Stop Lynas(SMSL) has submitted through ministerial hearings and publications on our website findings by various institutions like CAP, MMA and the Bar Council or he is practicing selective denial. Is the PM following the footstep of the President of MCA - we sent the latter volumes of scientific facts and evidences on harms that a rare earth plant can cause to the environment and the people living nearby?”

We are not opposed to the economic development that foreign investments can bring to our nation. To allow Lynas Advance material Plants (LAMP) to proceed when Lynas has NOT presented a safe plan as yet on how its radioactive waste will be dealt with in the long term and it has only done a sketchy preliminary environmental impact assessment will certainly confirm that Malaysia has a third world industrial safety and environmental standard. 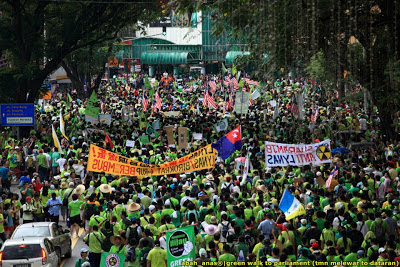 “For the PM to dismisse concerns of thousands of tax paying rakyat right after over 20,000 people braved themselves to say “NO” to the Lynas project at Dataran merdeka yesterday is a slap in the face of democracy and an insult to the PM’s much promoted motto of “Rakyat didahulukan!”. This Government has lost its credibility and citizens will organized to vote BN OUT.” Remarks Haji Ismail Abu Bakar

SMSL has received quality advice from different experts based on science and sound engineering practices. There are serious concerns with regard to Lynas’ management of its waste and radiation safety of its workers.

An independent assessment by the reputable and renowned Oeko Institute (http://www.oeko.de/the_institute/dok/594.php) in Germany is near completion. Preliminary findings have found Lynas not to adhere to safe international practices and that no licence should have been approved for its construction given the design fault let alone the issuing of a temporary operating licence which the Malaysian Government has so carelessly done.

A Kuantan resident Ram Ponusamy comments, “We the rakyat were made to believe that Malaysia could be a developed nation by 2020. We have seen now how our government has FAILED us in this important development goal by reducing our industrial safety and environmental standard to that of a dysfunctional third world country. We are ashamed of this government and we have only one choice – that is to VOTE IT OUT!!”

“Has the PM done the proper thing by getting an independent engineering audit following the New York Times revelation that there were serious structural problems with the plant? Why wasn’t a detailed EIA been ordered by the government in light of the LAMP being the world’s largest rare earth plant outside of China and there has not been any best practice rare earth plant available to date? Where is the government’s duty of care to its own tax payers and rakyat??” asks Mr Tan.

SMSL vowed to continue to campaign to oppose the plant and to VOTE OUT a government that is deaf and blind to the wishes of its people!

“Enough said and we will continue to fight this plant till the end to safeguard our basic rights to live in a hazard-free environment for our family and the future generations. The government can ignore the rakyat’s wish at its own perils!” Warns Mr Tan, Haji Ismail and Ram on behalf of SMSL

The Secret Business of Lynas Corporation


Kuantan| Save Malaysia Stop Lynas (SMSL) is appalled by the secrecy surrounding the Lynas ore concentrate shipment into the Kuantan port last night.  This is despite Lynas and the Malaysian Government making public announcements that it will adhere to the recommendations of the IAEA to be transparent and open with information to the public.  Lynas has just done the complete opposite.

Mr Tan Bun Teet, SMSL spokesperson who has just returned from a 4-day Australian campaign trip said,”Lynas must be desperately worried to be doing this secretly. At its AGM on Tuesday in Sydney I was there just to hear its Executive Chairman Nick Curtis told its shareholders that the Stop  Lynas campaign in Malaysia consist of just 10 people!  If we are so weak and ineffective, why try to gag us through a defamation action, why ship its ore concentrate in such secrecy and at night using police escort??”

The normal time taken for Lynas ore to reach Kuantan from the Western Australian port of Fremantle is a month.  The Kuantan high court only just lifted the suspension of the temporary operating licence (ToL) on 8th November – about two weeks ago.

Haji Ismail Abu Baker is one of the applicants who seeks a suspension injunction of the Lynas ToL.  He asked “Has Lynas and the WA government acted in contempt of the Malaysian court to allow the shipment to commence when a suspension order was still in place until 8th November or has the Malaysian government granted the import licence in contempt of the court order?”

To date, Lynas still has no safe solution to its massive amount of radioactive waste and its plant’s safety concerns remain outstanding. SMSL has confirmation from Australia that Lynas will NOT be able to return its radioactive waste to Australia – see media release at bottom part of this posting and the statements from the Fremantle Senator Scott Ludlam, and also the ABC report http://www.abc.net.au/news/2012-11-19/an-protesters-to-demonstrate-outside-lynas-agm-in-sydneyprotest/4380590

“We have had enough of this government here in Malaysia. Deploying public funded police force to escort Lynas a foreign company that pays no tax is an insult to injuries. When a government has reduced to doing this, we the rakyat have no choice but to vote it OUT!  Remarked Ram Ponusamy a Kuantan resident who was with SMSL for the Australian campaign visit.

SMSL is pursuing two judicial review cases at the Kuantan High Court and is awaiting a court date for its appeal against the 8thNovember lifting of the ToL suspension through the Kuala Lumpur High Court.

A responsible corporation will wait for the final court decision before sending its raw materials over which risks being carted back to Australia or lay abandoned should SMSL succeed in its appeal and its judicial review to revoke the ToL.

“Amidst falling stock value and credit squeeze, It is obvious that Lynas is so desperate it has to ship the ore in as fast as possible and in total secrecy – which reputable and respectable corporation will go so low to do that??” asked Mr Tan.

“The latest Lynas dirty tactic has only made us stronger and more determined to Stop Lynas.  SMSL together with other Stop Lynas groups and our supporters in Malaysia and overseas will fight hard.  We will campaign for the rakyat to vote this Government out in Malaysia and we will work with our international NGO network to target Lynas’ funders and customers.” Concluded Mr Tan. A Save Malaysia - Stop Lynas delegation from Malaysia will speak out today at the Senate Courtyard on the controversial rare earth processing plant of Australian company Lynas at 1.30pm.

The proposed plant has been the subject of mass protests and legal action in Malaysia.  The Australian Greens support Save Malaysia - Stop Lynas in their efforts.

Greens Senator Lee Rhiannon said “Thousands of Malaysians have taken a loud stance against the Lynas rare earth refinery and the radioactive legacy the plant would dump on local communities”.

“The refinery would create 320,000 tonnes of dry soil waste every year but Lynas has skimped on a full environmental impact assessment and local consultation has been sketchy at the best.  There is no social licence for the controversial processing plant to go ahead.”

“The Australian Greens are adding our voice to Stop Lynas campaign.  When Australian mining companies abuse local communities and the environment in other countries we have a responsibility to speak out.”

Greens Senator Scott Ludlam said "In September Lynas submitted an application to ARPANSA to import radioactive waste from Malaysia.  The company intends to ship radioactive ores through Fremantle Port to export them to their plant in Malaysia, and are now pushing for the right to import the wastes of those ores back onto Australian soil.  I know the people of Fremantle won't stand for it”.

"Malaysia’s nuclear regulator Atomic Energy Licensing Board said Lynas was legally obliged to remove radioactive waste from its advanced materials plant and return the residue to Australia - under the conditions of the temporary operating licence.  This defies Australian Government policy, and indeed Western Australian law, which asserts that Australia does not accept or import radioactive waste from other countries.  The company knows it will not get permission to dump the waste in Australia and should come clean about its real intentions.  The people of Malaysia have a right to know."

Senator Ludlam will also comment on the Federal Government’s ongoing Muckaty nuclear waste dump debacle.
Posted by Save at 03:57 70 comments

The emancipatory journey for a green Malaysia

From Kuantan to Dataran Merdeka: The emancipatory journey for a green Malaysia 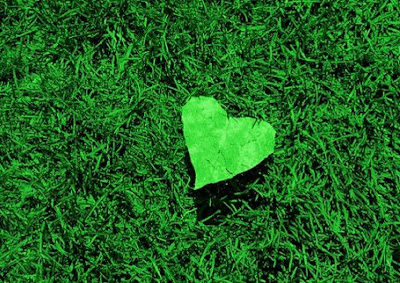 LYNAS – THE JOURNEY TO NOWHERE 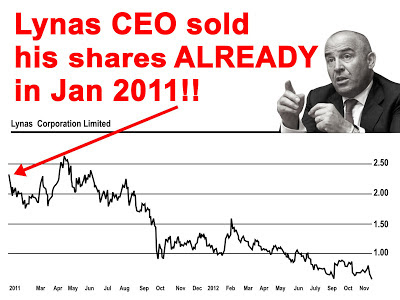