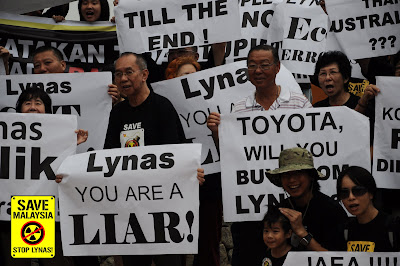 Save Malaysia Stop Lynas(SMSL) or SMSL Sdn Bhd (Co. No. 742744-W) is a people backed organization set up to protect the public interest, specifically those directly or indirectly affected by the risks to life and livelihood, deprivation of property and other rights enshrined in the Malaysian Federal Constitution that arose as a result of Lynas Advanced Materials Plant (“LAMP”) being constructed in Gebeng, Kuantan, Pahang.

SMSL first began as a movement that was initiated in early March 2011 to provide a platform for the Kuantan residents to voice their objection over the Pahang state government's approval of a RM700 million rare earth processing plant (the world's largest rare earth processing plant) in Gebeng, Kuantan, by an Australian mining firm named Lynas Corporation, Ltd. This movement which consists of Kuantan folks is a non-political organization (NGO), and is headed by a committee whose members are ordinary citizens from diverse professions, race & religious backgrounds.

In light of a New York Times article by Keith Bradsher, published on March 8, 2011
http://www.nytimes.com/2011/03/09/business/energy-environment/09rare.html, many Malaysians were awakened to the fact that their government had given the green-light to a project against their consent. With mounting public anger towards Lynas Corporation & the Pahang state government, the people of Kuantan started a movement and elected a charismatic kindergarten teacher, Vincent Jiam as their chairman. This movement was unanimously named 'Save Malaysia, Stop Lynas!' and its elected committee immediately drafted out programmes to create more awareness about Lynas' rare earth plant and its waste management issues, which involves the discarding of thousands of tonnes of radioactive waste and other industrial contaminants.

In the wake of the Fukushima Daiichi incident after the Japanese earthquake, more residents in Kuantan volunteered to join SMSL, thus triggering a huge influx of new members into the movement. The new members as diverse as housewives, doctors, engineers, fishermen, farmers, businessmen, bankers, lawyers and retirees came together as a united front in protest against Lynas.

Though it has yet to be acknowledged as a formal organization, the movement has held many events to date such as The Parliament Demo, The Australian Embassy Solidarity Walk, Car Sticker & Ribbon campaigns, Bukit Merah Resident's Testimony sessions & many others. Under the leadership of the newly elected and current chairman, Mr Tan Bun Teet (who took over Vincent Jiam in late May 2011) the movement is going ahead with their plans to hold more public-awareness programmes such as talks, dialogues, vigils, demonstrations etc.

SMSL's end goal is to stop Lynas Corporation from proceeding with their rare earth plant (Lynas Advanced Materials Plant-LAMP) in Gebeng,Kuantan. In view that LAMP is scheduled to begin their dry-run operations in September 2011, SMSL has vowed to do their utmost to halt their operations.