We Do NOT want another Toxic Legacy, Just Shut Lynas Down!

Today, the Lynas Review Committee held a public meeting in Kuantan to engage with concerned citizens to get their views on the Australian-owned Lynas rare earth refinery plant in Gebeng. Over 600 people packed into the meeting venue, clearly eagle to send strong messages to the Pakatan Harapan (PH) Government.

“The people have spoken. We voted for PH because we wanted a safe and clean future. We appreciate the challenge for the Government to manage this toxic saga created by the Najib Government. However, as tax payers and citizens of Malaysia, we call on the Government to shut down Lynas now!” said Mr Tan Bun Teet, Chairperson of citizens group, Save Malaysia Stop Lynas (SMSL).

Since 2011 when Malaysians learnt of the construction of a massive rare earth refinery plant in Gebeng, near Kuantan, SMSL together with numerous other non-governmental organisations have been campaigning against the wholly Australian-owned operations. Rare earth processing has long been associated with the use of highly hazardous acids and re-agents. Several court cases have been attempted to try to stop the then Najib Government from issuing Lynas Corporation the licence to operate and to leave massive amount of waste contaminated with radioactive materials such as thorium and uranium; hazardous substances including arsenic, cadmium, chromium and lead as well as chemicals, from its refinery plant using ore concentrate from its Australian mine.

Mr Hon Kai Ping, legal adviser for SMSL explained, “As we have heard, Lynas has breached its licensing conditions in so many ways and yet our regulators have done nothing about it. They have instead acted against the interests of our country and the public by facilitating and aiding a foreign company in its wrong doings. There is no justification at all to keep Lynas operating to produce more waste to add more hazards to the country.”

Lynas’ most hazardous waste stream is classified as non-exempt waste containing naturally occurring radioactive materials (NORM) of low level radioactivity under the International Atomic Energy Agency (IAEA) guideline. NORM waste with radioactivity above 1Bq/g has to be regulated and controlled by the Atomic Energy Licensing Board (AELB); and its non-radiological hazards should be monitored and regulated by the Department of Environment (DoE). Lynas’ WLP waste has radioactivity of close to 8Bq/g according to a 2014 UKM research findings, eight times higher than the regulatory exemption

limit. According to a DoE document, over 450 kilo-tonne of WLP waste is now stored next to the refinery plant in dams lined only with thin HDPE plastic.

Mr Tan lamented, “If this is the Lynas’ international safe standard of waste management, then we are doomed. We simply cannot afford to exposed ourselves to this kind of hazards. We are already seeing a toxic legacy piling up every day.”

Since 1991, the International Commission on Radiological Protection (ICRP) has long acknowledged the health effects of even low-level radiation exposure above the background level. ICRP has recommended an exposure level of no more than 1 mSv per year above the background for the public, and has drastically reduced the cumulative dose for workers, based on the widely used model of radiation protection - that there is no level of radiation exposure below which we are at zero risk – known as the linear-no-threshold (LNT) approach. Responsible medical organisations have warned that even low-level medical exposures such as chest X-rays (0.04 mSv per test) carry a quantifiable risk of harm. Cancer may not appear for 10-40 years.

“Lynas has operated for over five years now and it is still trying to play down the hazards of its wastes. Malaysia cannot afford to risk having this kind of company operating on our shore.” Mr Hon added.

Lynas has proposed to turn its wastes into various commercial products – from building and road paving materials to a soil filler known as Condisoil. This kind of dilution is only allowed when the radioactivity of the waste is close to the 1Bq/g threshold and if there is NO long live radionuclide. Thorium which is the dominant radionuclide in Lynas’ waste has a half-life of 14 billion years. All of the proposed diluted products by Lynas when released to the market will almost certainly exceed the 1mSv/year cumulative dose limit, posing serious health and environmental risks to the whole of Malaysia.

“The toxic legacy of Bukit Merah was created from monazite from our domestic tin tailing. Malaysia has been and will remain a laughing stock in the eyes of the international community by accepting such a hazardous and raw deal from Lynas, where we not only end up with its waste and pollution, we have even granted a 12-years tax break! How can this be compatible with PH’s manifesto to facilitate a sustainable development pathway for Malaysia?” concluded Mr Tan. 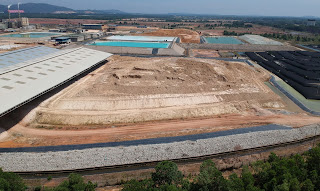