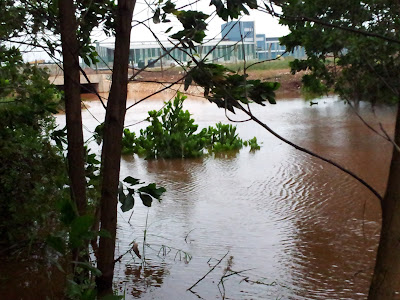 LAMP waste water discharge point in flood
Before we welcome the festive seasons of Christmas and the New Year, SMSL wish to take this opportunity to thank all the people in Malaysia and overseas for their tireless effort to support our struggle to stop the hazardous Lynas rare earth project.  It is through this concerted effort that today, we are temporarily relieved that the Lynas rare earth refinery has not got its operating license and that it has not commenced its production which was scheduled for September 2011.

Needless to say we will work harder in 2012 to make sure this dangerous project will never be open ever in Gebeng or anywhere in Malaysia. Today, we would like to re-capture reflect on what has happened and highlight some of our achievements and milestones reached since we initiated the movement in March of this year2011.

We have engaged made representations and handing of memos to with a diversity of independent experts, our  elected political representatives, our Government the Parliament of Malaysia and the Government of Australian High Commission. Through our protests and demonstrations and the series of conferences and awareness programs the government was forced to set up the IAEA panel in June and it recommended 11 conditions to be fulfilled before LAMP is to be granted an  pre-operating license.

We have consistently argued that the location of LAMP is totally unacceptable as it is located on a reclaimed swamp land.  The phenomenal amount of hazardous waste in the various waste streams-water, gas and solid which will be produced by the Lynas’ plant is of great concern. The waste disposal method of Lynas is is full of risks and hazards – simply storing massive amount of waste contaminated with radioactive thorium and uranium in open ponds lined only with 1.6mm of plastic is UNACCEPTABLE anywhere by any decent responsible Governments, least of all in a swampy area so close to the Balok River and the South China Sea!

The Lynas project poses serious threats not only to our natural environment which many depends on for their survival but to our long-term health and our economic future. The dense local population, the Balok River and the sea are important seafood production areas. The waste water outlet of the Lynas plant are already badly flooded after only a couple of days of monsoon rain. Imagine the overflowing and the uncontrolled spreading of Lynas waste if and when it starts production. 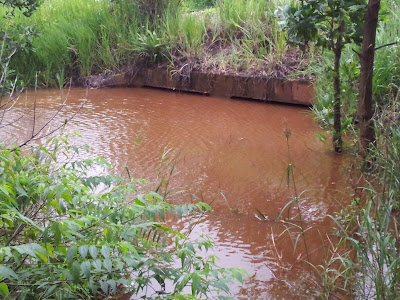 This is the main drain for Lynas' waste water which flooded after 2 days of rain
See photographs taken 12th December at the waste water outlet point of the Lynas plant for evidence. will sooner or later through floods and industrial accidents spewed radioactive wastes into the nearby environment and destroy the local fishing and food industries.

Will our seafood be as 'laku' once Lynas starts to dump its waste?

What will happen to the fishermen and the small traders depending on this industry for their livelihoods?

what about our tourism industry?  Who will want to pay to holiday near a toxic waste dump?  This is a permanent problem for Kuantan because the radioactivity of thorium will last onger than the lifetime of
planet earth!

It will irreversibly ruin our economy and our health. The recent monsoon rains have proven the point and we have here photographs of the waste water discharge of the Lynas plant almost covered by flood water.

If this discharge point is so heavily flooded only after two days of heavy rain, what will happen to the plant if there is  one week of sustained monsoon rain?

Recently, Lynas has given 25 reasons to justify the location of the rare earth refinery plant in Gebeng. The Menteri Besar has also given his and has continued to attack  SMSL and others who are supportive of the Stop Lynas campaign for our strong stance. As far as SMSL and the better informed people of Malaysia are concerned, Lynas could have given 100 or 1000 reasons, it will still not be good enough. We are opposed to the project  and will be here in force to stop the Lynas project in the new year.

Where is Lynas’ long- term waste storage strategy for its radioactive solid waste , commission and decommissioning plans as recommended by the IAEA?, may we ask?

Not only that its waste disposal method is problematic, the plant itself has many construction defects which are is risky and dangerous. We have suggested to the Government through MITI to stop the Lynas construction work and to carry out a full engineering audit of the plant for safe measure.  The government has not acted on it.

We would like to ask why haven't there been any social and economic impact assessment studies done before the refinery plant was approved for construction?

Why wasn't there a detailed EIA (environmental impact assessment) done for a project believed to be the world's largest rare earth refinery?

We are especially concerned that our Government has not exercised prudence and has failed in its duty of care to manage the proposal using a more stringent precautionary approach.  In the first place a project with radioactive waste and so much waste in each of the waste streams should NEVER have been allowed to be built in a swampy area so close to the sea which so many depended on for their livelihoods.

Despite all the covert smear campaigns against all anti-Lynas group in our mainstream media owned and controlled by the ruling parties, we in SMSL will continue to campaign for the total and full withdrawal of this toxic project! We are truly impressed by the support shown by the local residents and residents from other states as well as the good people of Australia. Our recent campaign trip up north has reassured us that people throughout  Malaysia are against the project and they have strongly advocated a change of government be it state or federal to surely bring about the closure of this toxic plant! We shall together work towards this goal as the ruling parties be it MCA, UMNO had never shown any regards for the voice of the people. 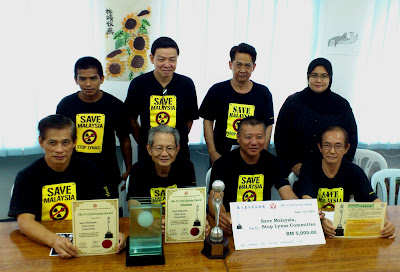 In the last two weeks, SMSL was proud to have won the 2011 SUARAM Human Rights Award jointly with Bersih 2.0 and the KLSCAH Civil Society Award on the 8th and 12th respectively. We wish to thank this very important recognition and honour for SMSL.  We especially want to thank our supporters for their courage and undying support for SMSL. These awards are a recognition of their invaluable support and we urge all Malaysians to emulate the organisations and individuals that
bestowed in us these honours to come forward and stand with us to be a part of people power to keep our beloved Malaysia safe and to rid of polluting industries and political scoundrels!